Coming on the heels of an accusation that a senior official at the National Center for Credibility Assessment (NCCA) facilitated the transfer of classified information to the government of Singapore via the Lafayette Instrument Company, AntiPolygraph.org has received information that NCCA has provided polygraph countermeasure documentation to a representative of Stoelting Co., another polygraph-manufacturing company. In 2004, Stoelting’s then CEO Lavern Miller pleaded guilty to attempting to export polygraph instruments to China without a license. 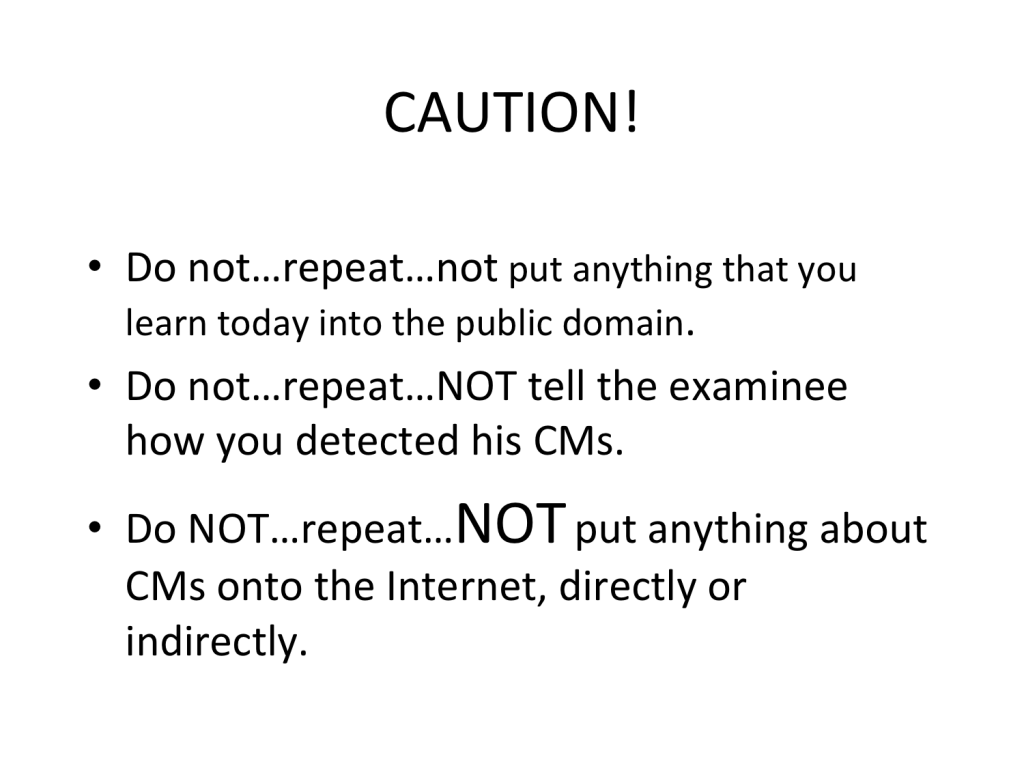 Of particular note, the presentation includes previously unpublished color screen shots from a pre-employment polygraph examination conducted by the CIA in 1997. This polygraph examination formed the basis for a 1999 American Polygraph Association (APA) journal article co-authored by the CIA polygrapher who conducted it and Donald J. Krapohl, the NCCA official recently accused of an Espionage Act violation.1

Screen shots in the slide presentation include details not shown in the 1999 article, such as the various questions asked, the precise date of the polygraph session, and the fact that it was a CIA polygraph examination. (In the 1999 article published in the APA quarterly, Polygraph, the CIA is not named as the agency involved.) This polygraph screen shot (slide 12) shows the date that the examination was conducted, 30 April 1997, and reveals one of the probable-lie “control” questions used: 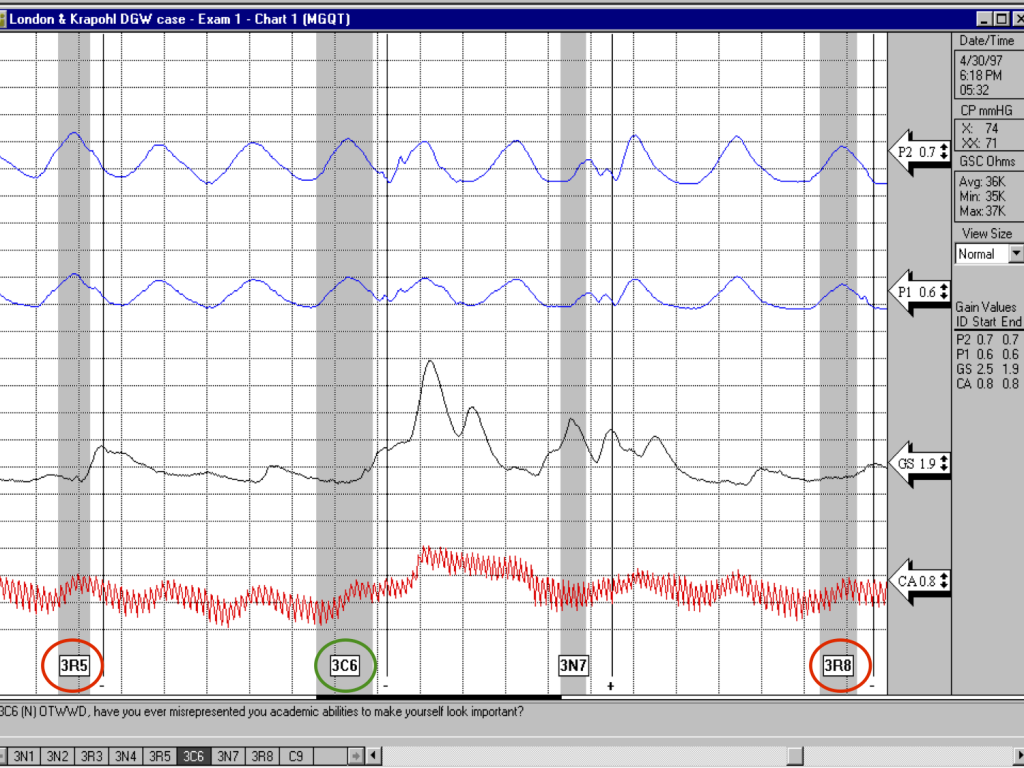 Slide 24 shows that the PolyScore polygraph chart-scoring software developed by the U.S. government gave the examinee a passing score. It also reveals the specific relevant questions that were asked in this polygraph examination: 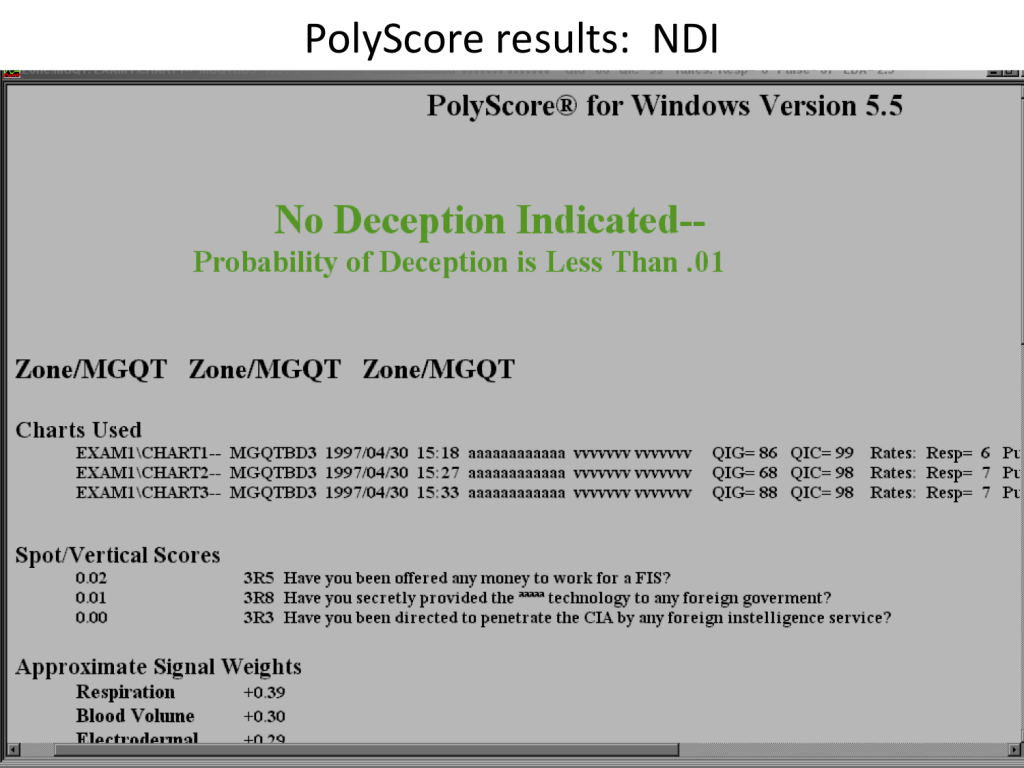 As we see, the relevant questions were:

Combine this with the probable-lie “control” questions cited in earlier slides:

and you have the key information required to successfully defeat such a polygraph examination.

Polygraph examinations are not difficult to defeat, and it would be hard to credibly argue that public release of the information contained in the presentation will harm U.S. national security interests in any way. But this is the kind of information that NCCA’s parent agency, the Defense Intelligence Agency, would probably withhold from a member of the public who requested it under the Freedom of Information Act. Yet such things seemingly circulate among NCCA’s favored friends.

It’s worth noting that the examinee in the above case study had purchased Doug Williams’ manual, “How to Sting the Polygraph.” The CIA polygraph examiner suspected countermeasures because of the large size of a reaction, but was only able to confirm that countermeasures were employed because the examinee admitted such when asked. An in-depth discussion of this case may be found on the AntiPolygraph.org message board.

The presentation (6.6 mb PDF | 6.8 mb PPTX) runs on for a total of 134 slides, but like other polygraph community documentation on countermeasures previously published by AntiPolygraph.org, it offers no coherent strategy for detecting the kinds of countermeasures described in AntiPolygraph.org’s free book, The Lie Behind the Lie Detector (1 mb PDF), or in former police polygraphist Doug Williams’ manual, “How to Sting the Polygraph.”

Update: With respect to why a polygraph manufacturer might want NCCA training slides on countermeasures, note that as McClatchy reporter Marisa Taylor mentioned last year in her article, “Polygraph world’s close ties spark accusations of favoritism,” Stoelting Co. has purchased a polygraph school. While Stoelting refused comment to Taylor on this, it appears that the polygraph school Stoelting purchased is the Academy of Polygraph Science in Fort Myers, Florida.