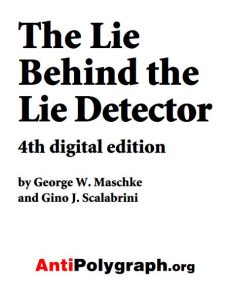 An article published in the French language newspaper Le Soleil in 2011 recounts the story of an applicant for employment with the Royal Canadian Mounted Police (RCMP) who read AntiPolygraph.org’s free book, The Lie Behind the Lie Detector, and used the countermeasure techniques provided therein to pass the RCMP’s pre-employment polygraph examination while lying about salient details of his history, including whether he intended to use polygraph countermeasures. An English translation of the article follows:

The Man Who Beat the Polygraph

(Québec) Anyone can beat the lie detector with a little preparation says Jean-François Courteau, who says he fooled that of the Royal Canadian Mounted Police without getting caught.

Jean-François Courteau, an information technology consultant from Québec, once was considering a career in the field of cybercrime. In 2006, he went through the entire selection process for the RCMP.

In his preparatory research, he quickly stumbled across the book, The Lie Behind the Lie Detector, a work that is offered for free on the Internet, that provides all the tricks for beating the polygraph.

Jean-François Courteau began by completing the RCMP questionnaire, whose hundred questions aim to bring out all the skeletons from the candidate’s closet.

Once connected to the polygraph, he says he lied on 3 of the 10 questions. “They asked me if I had omitted information about criminal acts I may have committed,” recounts Mr. Courteau. “I said no, but I knew that eight months previously, I had driven after drinking.”

The candidate says he also lied on the questions, “Do you intend to tell the truth?” and “Do you intend to use means to counter the polygraph?” “I replied no and yet that is what I was doing the whole time,” he summed up.

Jean-François Courteau says he was later eliminated because of a credit record that the RCMP deemed insufficient.

He draws from his experience the conclusion that the polygraph is partly based on chance. “It’s a random measure,” judges Jean-François Courteau. “Someone can arrive there totally dishonest, and he can pass anyway if he is well prepared.”

While it is not AntiPolygraph.org’s intention to help individuals obtain employment for which they are not qualified, Courteau’s experience underscores the folly of relying on the pseudoscience of polygraphy for personnel security screening.