On Monday, 9 June 2014, the Los Angeles Times reported that U.S. Customs and Border Protection Assistant Commissioner James F. Tomsheck, who headed CBP’s Internal Affairs unit, “was removed from his post…amid criticism that he failed to investigate hundreds of allegations of abuse and use of force by armed border agents.”

Tomsheck, himself a former polygraph operator, was ultimately responsible for Operation Lie Busters, an ongoing criminal investigation that attempted to entrap individuals who provide instruction in how to pass polygraph examinations.

In July 2013, Tomsheck was the commencement speaker at a National Center for Credibility Assessment graduation ceremony. Tomsheck’s speech was the top story in the August 2013 issue of the CBP-IA newsletter, Special Delivery, a copy of which (1.2 mb PDF) has been obtained by AntiPolygraph.org. The full text of the article is reproduced below: 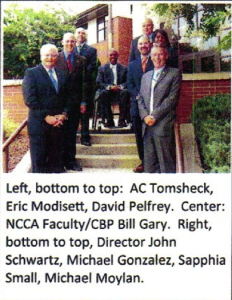 On July 24, 2013, five CBP students received diplomas completing the masters-level curriculum in Forensic Psychophysiology at the National Center for Credibility Assessment (NCCA) commencement. The graduates are now assigned as intern Polygraph Examiners in the CBP-IA Credibility Assessment Division (CAD). After a successful six-month internship, the graduates will become federally certified polygraph examiners. Once certified, these new polygraph examiners will play an important role in the effort to conduct 100% screening of all law enforcement applicants before they are hired by CBP, as required by the Anti-Border Corruption Act.

NCCA Director William Norris introduced the Commencement Speaker as “one of us” and directed the attention of the audience to a highlighted photograph of the 1984 graduating class that included a young Secret Service Agent, now CBP IA Assistant Commissioner James Tomsheck. AC Tomsheck congratulated the 32 graduates representing numerous federal agencies and praised them for their diligent work in the classroom and laboratories. He emphasized their success could not have been possible without the support of their families and agencies, and the excellent instruction received by the NCCA faculty. Mr. Tomsheck advised the graduates that they were entering the profession at a time unparalleled in the government, when all agencies were relying more on the unique ability of polygraph to protect our National Security from Insider Threats, and provided the assemblage with examples of penetration attempts wherein polygraph developed critical information impossible to obtain through traditional vetting methods. He emphasized that the graduates must always maintain and follow the standards taught and endorsed by NCCA, and implemented through the policies of their respective agencies.

NCCA, the federal government’s polygraph school, turns out newly minted polygraphers in 14 weeks, less than half the length of a typical barber college.