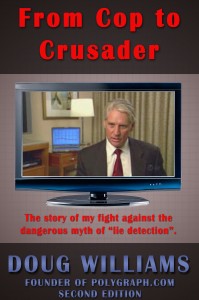 Former Oklahoma City police polygraph examiner Doug Williams, who has campaigned against polygraphy since realizing in the 1970s that what he and fellow polygraphers were doing is a fraud, has for the first time told the story of how federal agents in February 2013 attempted to entrap him for teaching people how to pass polygraph examinations. The federal criminal investigation, called “Operation Lie Busters,” has been reported on at some length by McClatchy Newspapers investigative reporter Marisa Taylor, but Williams has previously declined comment except to say that he had done nothing wrong.

In a new edition of his book, From Cop to Crusader: The Story of My Fight Against the Dangerous Myth of “Lie Detection,” Williams tells the story of how an undercover federal agent came to his office on 21 February 2013 for instruction on how to pass a polygraph test. The agent placed a backpack in the corner of the office that likely contained video recording equipment. During the training session, the agent, who claimed to be a sheriff’s deputy seeking employment with U.S. Customs and Border Protection, made unsolicited admissions to having “smuggled drugs [into] the jail” and “got[ten] a blow job” from a female juvenile while taking her home in his official vehicle.

As soon as the undercover agent left Williams’ office, several federal agents in bulletproof vests stormed in and handcuffed Williams. The agent who seemed to be in charge of the raid was Special Agent Douglas Robbins of the U.S. Customs and Border Protection (CBP) Office of Internal Affairs. Also present during  the raid was CBP Senior Special Agent Fred C. Ball, Jr., whom CBP polygraph unit chief John R. Schwartz  described as “the case agent and polygraph expert responsible for orchestrating and conducting the investigation” in a recent letter nominating Ball for an American Polygraph Association award. Trial Attorney Anthony J. Phillips of the U.S. Department of Justice’s Public Integrity Section was also present.

The agents did not arrest Williams, but kept him handcuffed as they executed search warrants at his office and home, where they seized his paper and electronic records as well as his polygraph instrumentation. These were returned to Williams some two months later but were exploited by federal agents to create a polygraph watch list of 4,904 names that has been circulated among nearly 30 federal agencies.

To date, Williams has not been charged with any crime, but he remains in legal jeopardy. Operation Lie Busters, which has serious implications for freedom of speech in America, is ongoing, and Williams has “heard the FBI is still interviewing people from the list of customers they took from [his] computer.”

For the full story, pick up a copy of Williams’ From Cop to Crusader, which may be ordered from his website or on Amazon.com. Williams’ account of the federal entrapment attempt and raid appears at Chapter 18.