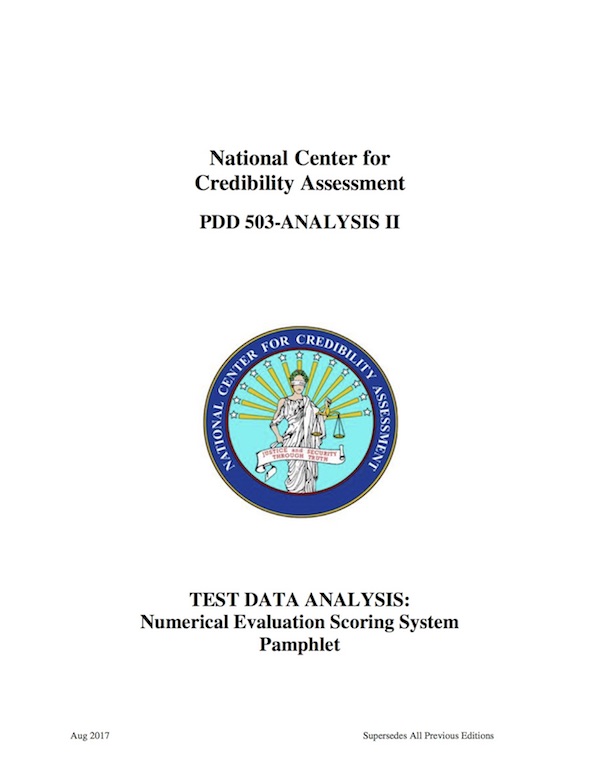 AntiPolygraph.org has today published the National Center for Credibility Assessment’s “Test Data Analysis: Numerical Scoring System Pamphlet” dated August 2017 (488 kb PDF). A note before the table of contents details the changes made over the years:

Note: The content and substance of this pamphlet was officially approved on 23 Aug 2006. In March 2011, this pamphlet was edited, but only for grammatical issues and curriculum style, format, and consistency of design factors, and no substantive changes to the content were made. In January 2012, content changes were made relative to requirements for two artifact free askings. In June, 2014, content changes were made effectively eliminating the 2:1 ratio from the EDA Ratio Scale. In Aug 2015, content changes were made changing the wording of “artifact free” to “valid asking”, as well as a definition added to App. G. Jan 2017: Changed EDA/CV ROW from “SO to EA” to “SO to 5 seconds beyond the EA”. The latency rule is effectively eliminated by the new ROW. Aug 2017: Updated the description of the 7-position scoring methods for the CV channel.

AntiPolygraph.org has previously published the August 2006 version of this document, which remains available (376 kb PDF).