Book Review: A Life of Lies and Spies by Alan B. Trabue 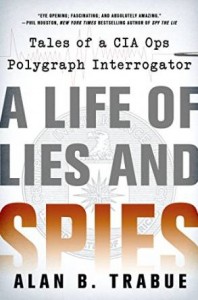 Alan B. Trabue retired from the Central Intelligence Agency in 2011 after a 40-year career, 38 years of which he spent in the polygraph division. AntiPolygraph.org has received a review copy of his memoir, A Life of Lies and Spies: Tales of a CIA Ops Polygraph Interrogator (New York: St. Martin’s Press, 2015). The book comprises numerous entertaining anecdotes about polygraph examinations the author conducted on agents recruited by CIA case officers, with a special focus on operational security matters. As Trabue notes in his epilogue, it is his hope that his story not only entertains, “but also helps keep others in the world of espionage and covert activities safe from harm.” While Trabue provides relatively little detail about polygraph procedure, or about the history of the CIA polygraph division, this review will focus on such details; more general reviews of the book are available here and here.

Trabue notes that when he first interviewed with the CIA polygraph section in 1972, it was known as the “Interrogation Research Section.” The cryptic name is understandable when one realizes that polygraph “testing” is all about interrogation. Trabue refers to himself as a “polygraph interrogator” (p. 7), noting (at pp. 29-30):

During my training, it was constantly stressed that the CIA considered the polygraph process to be an aid to interrogation. My training officer stressed that my mission was to obtain any reportable information regarding the issues under investigation and report the information to the adjudicators. Interrogation and the reporting of information obtained during polygraph examinations were stressed much more than the technical results of actual polygraph testing….

But despite this acknowledgement, Trabue seems not to understand that polygraphy lacks any scientific basis and to actually believe that polygraph charts are a reliable indicator of deception, noting at p. 79, that “[a]fter a deceptive response has been clearly identified on the polygraph charts, an interrogator will confront the examinee with that fact.” He writes that [m]any [polygraph examiners] had cases with polygraph charts clearly indicating that an agent was a double agent…” (p. 83) and speaks of “unmistakable deceptive reactions” (p. 177).

Of course, there is no such thing as a “deceptive response” that can be “clearly identified” on polygraph charts. The entire procedure is pseudoscience–the brainchild of interrogators who had little grasp of the scientific method. The author’s failure to understand this after nearly four decades as a polygraph examiner bears out Upton Sinclair’s observation that “[i]t is difficult to get a man to understand something, when his salary depends upon his not understanding it.”

Trabue notes that when conducting polygraph examinations of agents recruited from within foreign intelligence services, he “tried to make posttest decisions based solely on analysis of the polygraph charts and avoided any posttest interrogation” (p. 92). No doubt he was following CIA polygraph protocols, but any reliance on polygraph chart readings is misplaced: the procedure is inherently biased against the truthful and yet easily defeated by liars using simple countermeasures that polygraph operators cannot detect.1

Trabue actually provides an example of the unreliability of polygraph chart readings in Chapter 12 (“Castro’s Buddy Beats the Box”). This chapter tells the story of Trabue’s experience conducting “a very thorough polygraph interview and examination” of a Cuban agent recruited by the CIA. Trabue notes that “the results [were]…clearly and unmistakably nondeceptive” and that he “was confident in [his] analysis and with the final call of No Deception Indicated.” But Trabue adds:

There is an unexpected and bitter ending to this story. In a most unfortunate turn of events, about two years later I was advised that Fidel Castro had been seen on Cuban television with his arm around the shoulders of the agent I tested. Castro revealed to the world that my examinee had been a double agent against American intelligence for many years….

Trabue does not name the Cuban double agent who beat him, but his account closely matches reporting on the late Cuban intelligence officer Nicolás Sirgado, who beat the CIA polygraph three times.

In a letter penned in 2000, convicted spy Aldrich Hazen Ames, who twice passed CIA polygraph screening examinations while spying for the Russians, offered insight into why the CIA continues to rely on polygraphy despite ample evidence of its unreliablity: bureaucratic CYA:

Deciding whether to trust or credit a person is always an uncertain task, and in a variety of situations a bad, lazy or just unlucky decision about a person can result not only in serious problems for the organization and its purposes, but in career-damaging blame for the unfortunate decision-maker. Here, the polygraph is a scientific godsend: the bureaucrat accounting for a bad decision, or sometimes for a missed opportunity (the latter is much less often questioned in a bureaucracy) can point to what is considered an unassailably objective, though occasionally and unavoidably fallible, polygraph judgment. All that was at fault was some practical application of a “scientific” technique, like those frozen O-rings, or the sandstorms between the Gulf and Desert One in 1980.

An anecdote recounted by Trabue (at pp. 197-98) speaks to this sort of reliance on polygraphy as a means of skirting responsibility for one’s decisions:

There was one other occasion when I was pressured, again from the chief of an office. I was within minutes of leaving the office to test an agent who was going to be involved in a diplomatically sensitive and expensive operation.

As I prepared for the case in a vacant office, the chief entered ans slowly approached. Putting his knuckles on the desk, he leaned over me, made sure he had my eye, and said, “I expect DI or NDI results.”

His words were delivered with all the menace, threat, and intimidation he could muster.

He paused and then added, “I don’t want to hear any of that Inconclusive crap.”

At first, I thought he was joking. His menacing words were delivered in an overbearing, intimidating manner and brought an instant smile to my face, but I quickly saw from the expression on his face that he was dead serious.

As my smile faded, I said, “Sir, I’ll do my best to get clear test results, but unfortunately the outcome of some polygraph tests is an Inconclusive call. Sometimes there are health reasons, and sometimes there are just inconsistent and erratic responses for unknown reasons. Inconclusive means you don’t know one way or the other. I’m not about to flip a coin jsut to make it DI or NDI.”

“I want DI or NDI,” he said, glaring down at me. “That Inconclusive call won’t do me any good. We’ve got an expensive operation about to start, and I’ve got to know one way or the other.”

I repeated, “I’ll do my best, but an Inconclusive call is a possibility.”

Still hovering over me, he slowly and emphatically repeated, “I want a DI or NDI call.” He raised himself to full height again, turned his back to me, and walked out of the office.

CIA polygraph trivia mentioned includes the fact that for decades the CIA used the Stoelting three-channel Executive Model polygraph with a communal inkwell that held red ink. The instrument was built into a briefcase  and weighed about 25 pounds (pp. 129-30, 239). Trabue notes that “[t]here was a standing joke in Polygraph Section that foreign intelligence services could easily identify CIA polygraph examiners because their right arm was longer than their left arm” (pp. 118-19).

All interrogation officers are familiar with the concept called “throwing a bone,” wherein an examinee offers an interrogator information to throw him off track. It is a stalling tactic, usually an act of desperation, used in the hope that the interrogator will take that bone and run with it for a while and perhaps even believe that the bone is the truth, the whole truth, and nothing but the truth. A “bone” may be information fabricated by the agent, it may be a partial truth, and it may be an entirely true piece of information, but it most certainly is not the information that the examinee was really concealing during interrogation. After a lengthy interrogation, a confession will many times be treated by an interrogator as a bone thrown by the examinee. The interrogator will say something like, “John, thanks for telling me that, but that could not possibly explain the massive reactions I saw on your polygraph charts. Something much more serious caused you to react. John, what else is there?” The interrogator will continue with the interrogation as if there had been no confession. If what the examinee said was truly the reason for his reactions, he will continue to offer his story over and over again, because he has nothing else to add. (emphasis added)

As one of only three published memoirs by a retired CIA polygraph examiner,2 Trabue’s My Life of Lies and Spies will be of interest to all concerned with polygraphy, interrogation, or intelligence operations.