AntiPolygraph.org has received a copy of a presentation (1.4 mb PDF) on interrogation given by John R. Schwartz, who now heads the U.S. Customs and Border Protection Internal Affairs Credibility Assessment Division. In that capacity, Schwartz heads one of the federal government’s largest polygraph units, with some 71 polygraph examiners and a fiscal year 2012 budget of $11.4 million. Schwartz has previously worked as an instructor at the Department of Defense Polygraph Institute (since renamed the National Center for Credibility Assessment) and in 1995 served as its acting director. As such, his views on interrogation are presumably influential.

Schwartz gave the presentation, titled, “Interrogation Tips for Nerds Like Me” at an October 2007 seminar held by the California Association of Polygraph Examiners in Coronado. Among other things, the presentation brings home the point that polygraph “testing” is really all about interrogation. For example, slide 6 covers “internal pressure” in the polygraph examinee that can be exploited by the polygraph operator : 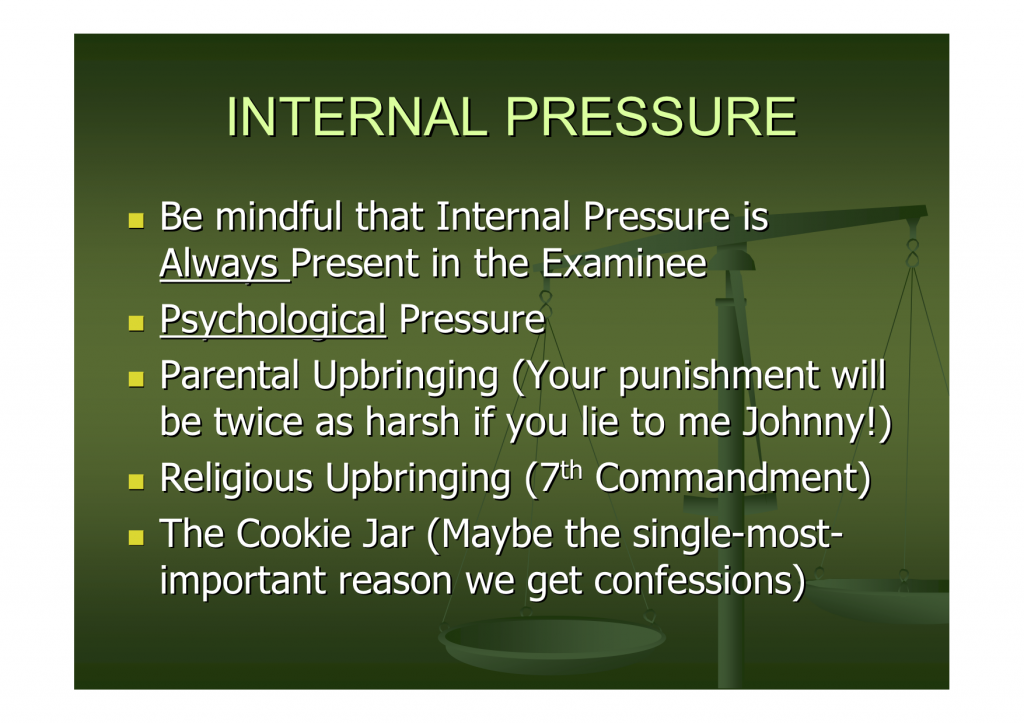 The “cookie jar” story is a simplistic tale that polygraphers like to tell during the pre-test phase. Retired FBI polygrapher Jack Trimarco explained it this way in a 2007 radio interview:

Moms are the best polygraph examiners in the world because they know Little Johnny 24-hours-a-day, and when Mom tells Johnny, “Don’t take a cookie before dinner” and she walks into the kitchen and the cookie jar has the top off of it and there’s crumbs on the counter and crumbs, in fact, on little Johnny’s mouth, and she says, “Johnny, did you take a cookie?” and he goes into the fetal position and looks down and lowers his voice and says, “No, Mommy,” well Mommy knows immediately that Johnny did take the cookie.

The polygrapher attempts to convince the examinee that the polygraph results are like the cookie crumbs on Little Johnny’s mouth.

Slides 10 and 11 document a dangerous mindset prevalent among American interrogators: that their job is to extract confessions (as opposed to determining the truth). Federal polygraph operators are typically evaluated based on their post-test confession rates. Schwartz dismisses the possibility that the polygraph could be wrong and enumerates methods for overcoming objections. Yet a statistical analysis (255 kb PDF) by Dr. Alan P. Zelicoff of the best polygraph field studies suggests that “if a subject fails a polygraph, the probability that she is, in fact, being deceptive is little more than chance alone; that is, one could flip a coin and get virtually the same result for a positive test based on the published data.” 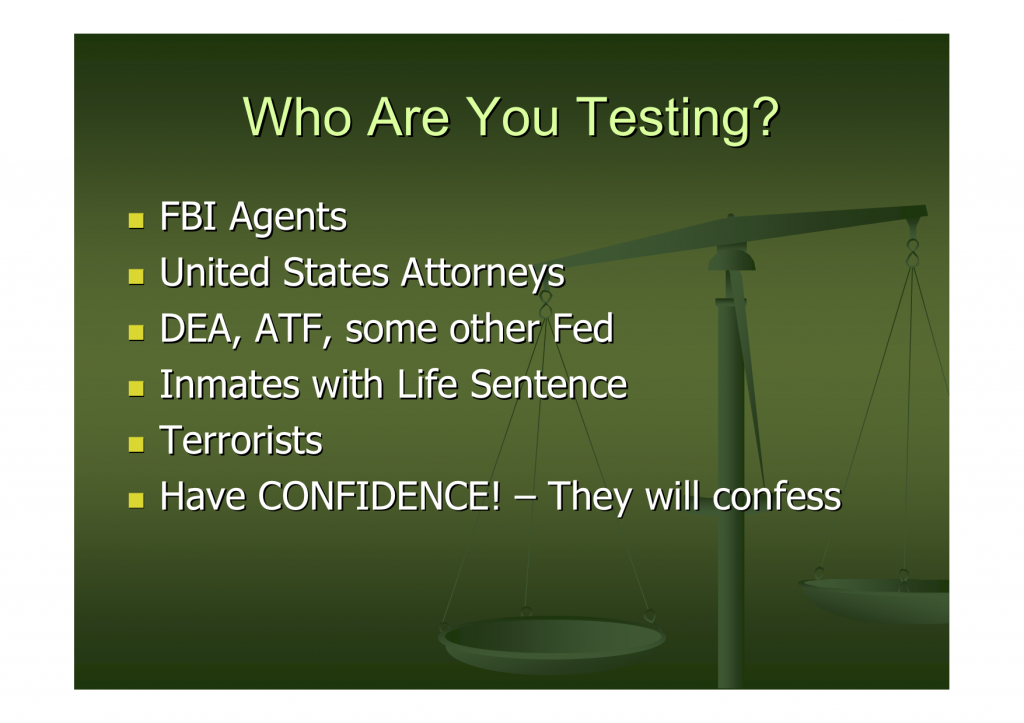 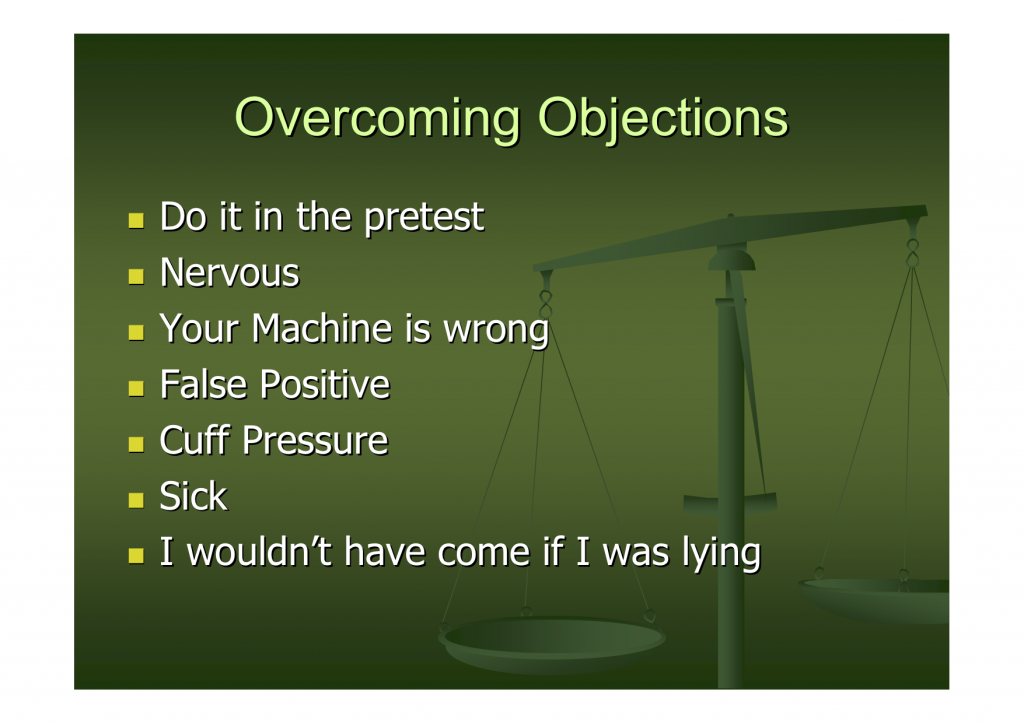 There is an inside joke among polygraphers that they are salesmen with a difficult job: selling jail time. In slide 13, urging the polygrapher to keep the interrogation going as long as possible, Schwartz describes the job a different way: “manure salesman”: 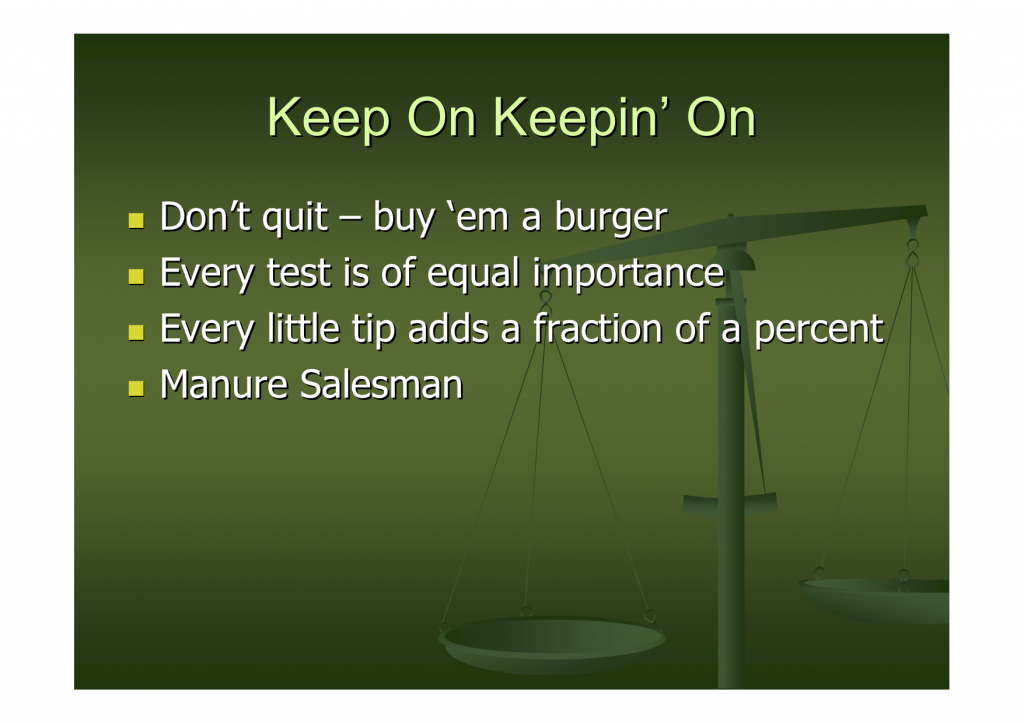 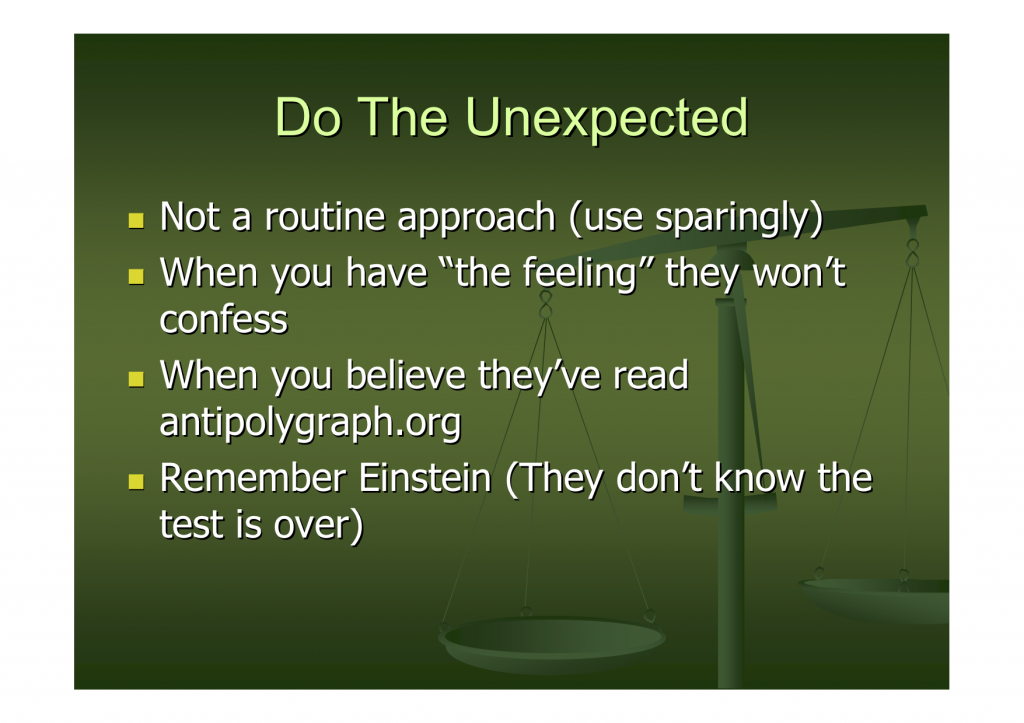 In slides 20 and 21, Schwartz suggests a variety of polygraph techniques “if nothing else works,” including one of his own creation: “Schwartz’s Helpful Interrogation Test,” evidently an adaptation of the peak of tension test. This technique is not included in the U.S. Customs and Border Protection polygraph handbook (1.9 mb PDF), and it’s not clear if CBP polygraphers use it. Nonetheless, it is cause for concern that a federal polygrapher devised and advocated a “home brewed” polygraph technique: 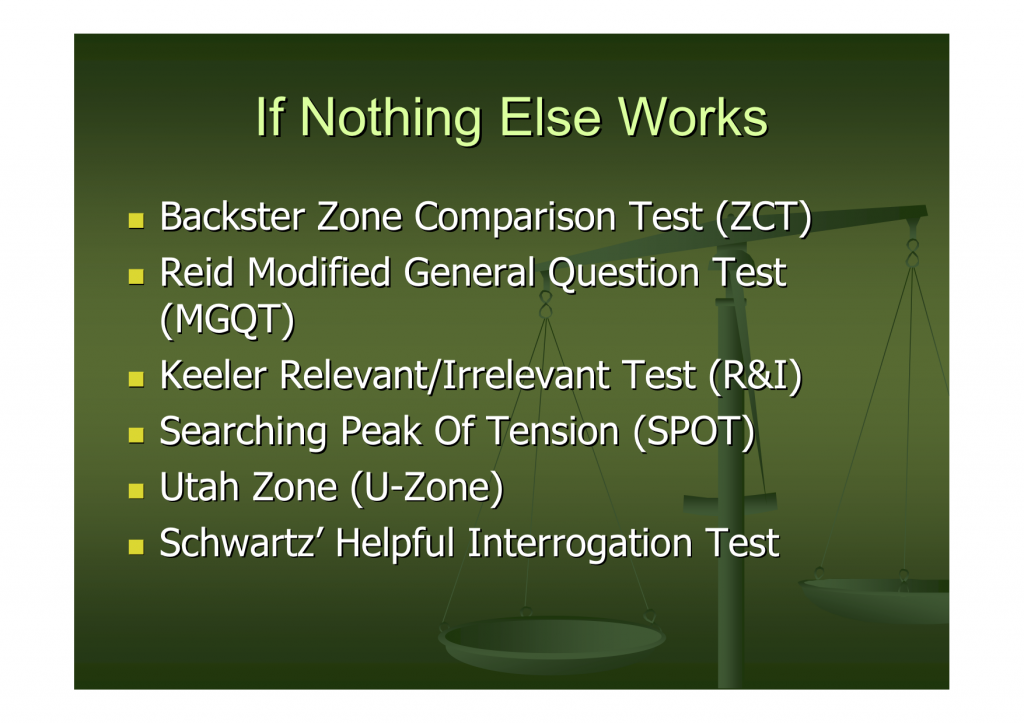 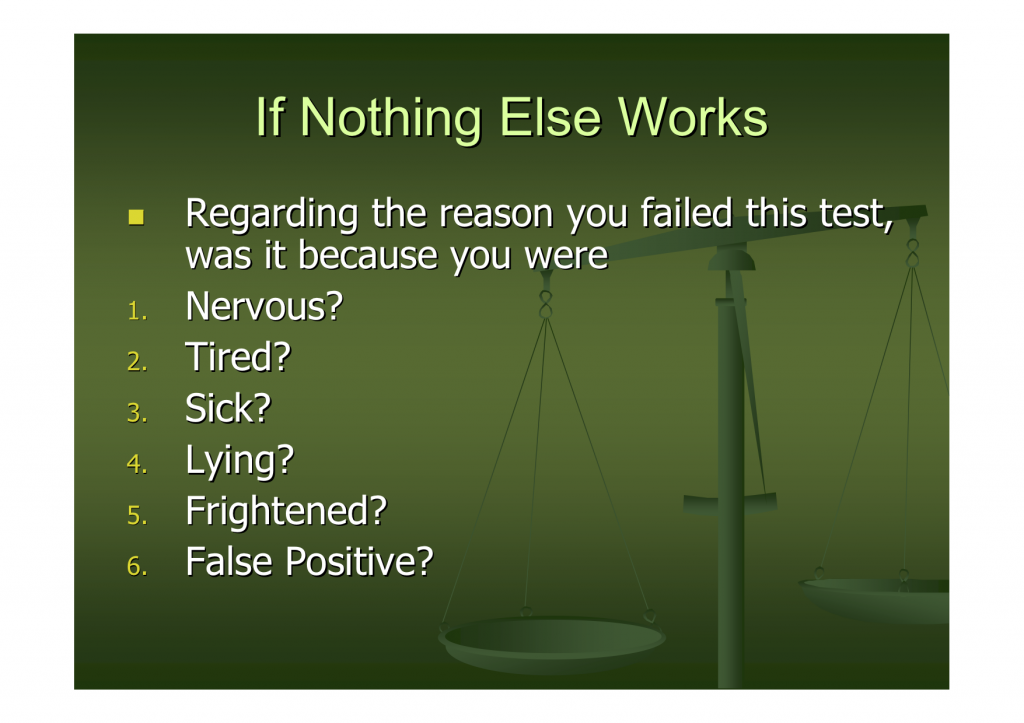 It is absurd to ask a polygraph examinee why an invalid procedure (polygraphy) may have produced an inaccurate result. It’s like asking why a coin toss came out heads instead of tails. Schwartz’s home brewed “Helpful Interrogation Test” has one thing in common with the Backster Zone Comparison Test, the Reid Modified General Question Test, and the Keeler Relevant/Irrelevant Test: it is the brainchild of an interrogator, not a scientist. Beware of manure salesmen.