Is AntiPolygraph.org Being Targeted By the NSA?

I was recently polygraphed by the DOD and they had logs of websites I had visited the night before from my ISP and mentioned this site by name and attempted to disprove to me everything you have on the website. Certainly a scare tactic, more so interesting how they used logs regarding my web activity. Seems somewhat constitutionally messed up if you ask me.

AntiPolygraph.org replied asking whether the logs of websites were from a commercial ISP, or whether it was perhaps the military network NIPRNet. The petty officer replied “It was a commercial ISP from my own personal house!” adding that (s)he was headed to work and would send another e-mail regarding his/her experience later that day.

It seems plausible that the petty officer received a talking-to before (s)he could send the follow-up message promised in August.

The petty officer’s account suggests that the U.S. Government may be targeting AntiPolygraph.org in an attempt to identify those who visit the site. Journalist Glenn Greenwald reported in July, based on documents provided by former NSA contractor Edward Snowden, that the NSA operates a system codenamed XKEYSCORE that “allows an analyst to learn the IP addresses of every person who visits any website the analyst specifies.”

AntiPolygraph.org might be of interest to NSA because we provide information on polygraph techniques employed by the U.S. Government for personnel security screening. Our free book, The Lie Behind the Lie Detector (1 mb PDF), includes information on techniques that can be used to pass a polygraph examination whether or not one is telling the truth. We make this information available in order to provide honest individuals with information that can help to mitigate the serious risk of a false positive outcome. However, the same information can also be used by deceptive persons to pass the polygraph.

In August, McClatchy reporters Marisa Taylor and Cleve R. Wootson, Jr. reported that federal agents had launched “a criminal investigation of instructors who claim they can teach job applicants how to pass lie detector tests.” A key objective of the investigation seems to have been to identify the instructors’ customers. Business records seized from the two instructors targeted, Chad Dixon and Doug Williams, “included the names of as many as 5,000 people.” AntiPolygraph.org’s free book is downloaded about 1,000 times in a typical week. 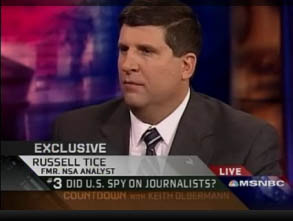 NSA whistleblower Russ Tice, contacted in June and asked whether AntiPolygraph.org would be a likely target for direct monitoring in order to match up visitors to the site against a list of government employees or applicants replied: “YES! NSA is already targeting visitors to your site.  This is a no brainer.”

Also in June, in an interview with Sibel Edmonds’ Boiling Frogs show, Tice mentioned that contacts inside the NSA who are providing him information are all beating the polygraph:

Tice told AntiPolygraph.org that his contacts learned how to beat the polygraph from AntiPolygraph.org and that the information was retrieved from a computer not associated with their own computers, printed out, and circulated.

AntiPolygraph.org welcomes tips from any readers with relevant information. See our contact information page regarding how to get in touch. Comments may also be posted below.