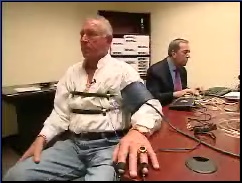 Following hard on the heels of NBC Dateline’s shameful use of the lie detector as a ratings gimmick, syndicated television news program Inside Edition will today feature a polygraph “test” of Zsa Zsa Gabor’s husband, Frederic von Anhalt, regarding his claim that he might be the father of the late Anna Nicole Smith’s daughter, Dannielynn.

A video preview shows von Anhalt sitting connected to the polygraph instrument of the infamous Edward I. Gelb, whom AntiPolygraph.org some four years ago exposed as a phony Ph.D. Gelb is a business associate of fellow polygraph operator Jack Trimarco, whom in February 2007 was hired by Fox News to conduct a polygraph examination of von Anhalt for The O’Reilly Factor. Von Anhalt ultimately did not proceed with that examination.