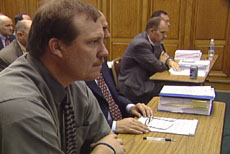 An unsolved murder in Eau Claire County could affect one man’s job.

Todd Trapp is an Eau Claire police officer who’s accused of giving sloppy polygraph tests during several investigations.  It appears one of those cases in question is the investigation into Angelina Wall’s death.

Wall was strangled and left along County Road J near Fall Creek five years ago.  Her killer has never been caught.  In a hearing about Trapp’s future with the police department, the city went through a series of questions that Trapp asked a murder suspect during a polygraph test.  One of those questions was, “Did you kill her and leave her body by the road?” Another question referred to the year 2001. That was the year Wall was killed. Trapp is accused of saying the suspect was being truthful when the results show that person was lying. Eau Claire Police Chief Jerry Matysik would not confirm that Trapp conducted a lie detector test in the Wall case. He said that revealing more information about those cases right now could compromise the case against Trapp.

Several polygraph exams that Trapp conducted are being questioned. One of his former instructors testified on Monday. He says the way Trapp scored polygraphs is inconsistent with his training.

Trapp’s attorney says Todd’s work performance has been affected by sleep apnea and Attention Deficit Disorder. He says Trapp has been treated for both.

Chief Matysik is asking that Trapp be fired. The hearing about that will continue on Tuesday. The Police and Fire Commission could make a decision about Trapp’s future after the hearing is finished.

It is ironic that Trapp is being accused of administering “sloppy” polygrap examinations. Polygraph “testing” is an inherently sloppy procedure, as it lacks standardization and control. In fact, it has no scientific basis whatsoever. “Failing” the polygraph is no evidence of guilt. Conversely, no one should ever be excluded as a suspect merely for having “passed” this invalid test.